Natural Balanced Dentistry - Spencer Laflure
We are very big fans of a holistic whole horse approach to evaluation and treatment of horses (all animals & humans as well).  Spencer LaFlure is bar none the best equine dentist in the country, he is the Albert Einstein of Equine Dentistry!! I was a dental hygienist for 17 years and have seen and experienced with our own horses that Spencer knows more about balancing a horses mouth than most human dentists know about balancing a humans mouth!  Spencer is a big believer in a whole horse, natural, respectful, kind approach to his patients and they really appreciate him and know he is helping them and cares.

We get together with Spencer at least once a year and swap information on the new things we have learned in saddle fitting and he has learned in dentistry and how they relate to each other. We are both constantly learning and trying to improve on what we do.

*If you would like the best to work on your horse or horses and/or you may know of someone (like your favorite veterinarian) that might like the best instruction available to become a Neuromuscular Equine Dentist.
Email: 4thorse@gmail.com
Visit the website at: The Center for Neuromuscular Horse Dentistry

**Spencer created a very informative DVD for the horse owner and practicing Equine Dentist that shows and explains the importance of proper equine dentistry!
Here is the link to get your copy of the DVD: Horseman's Guide to Natural Balance Dentistry
by Spence LaFlure, Neuro Muscular Equine Dentist
Here is a link to an article about Equine Neuromuscular Dentistry 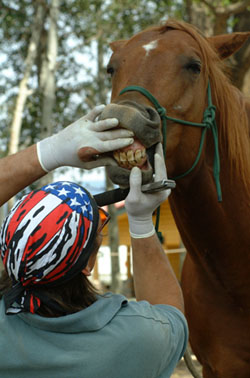 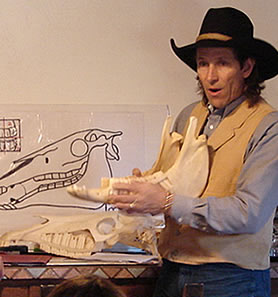 **Dilly’s Story-
Dilly was our wonderful saddle mule we bought in May of 2009. We could see in Dilly’s body she was very out of balance due to what we think was caused from a past trailer accident about 4 years earlier. Untreated Dilly stood on her own with her body always bent way to the left and it was very hard for her to bend to the right.  Spencer could see how this chronic abnormal posture created an irregular and unhealthy wear pattern in her teeth. After Spencer balanced her mouth it was so different for her she couldn’t eat very well until our local, excellent Equine Chiropractor Bill Hampton adjusted her TMJ and body to help her adjust and realign to her newly balanced mouth. The combined treatments made a drastic difference, Dilly immediately could eat again normally and within about a week she was standing straight, able to bend to the right and enjoying her new flexibility and comfort!!
*Bill Hampton travels all over the country teaching and treating horses, if you would like to contact him check out his web site atwww.EquineSpine.com 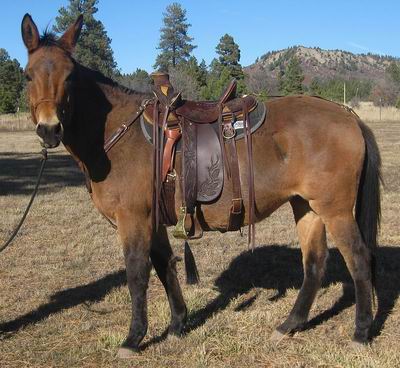 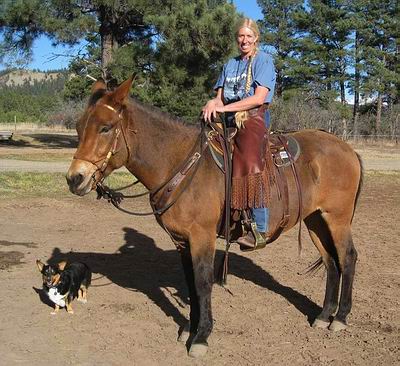 William (Bill) Hampton, born and raised in San Jose, California, a veteran of the U.S. Army serving a tour of duty in Vietnam in 1969, returned to resume his career as a land surveyor with the City of San Jose while continuing  his undergraduate college studies. Dr. William Hampton, D.C. received his Doctor of Chiropractic degree (D.C.) in 1977, graduating from Cleveland Chiropractic  College, Los Angeles, California,  then  opened  his  human  chiropractic   office  in San Jose, California  practicing in the same location for the  following 25+ years. During his chiropractic practice he was an instructor at  Palmer College of Chiropractic for seven years, teaching Gonstead Chiropractic  Adjusting Technique, X-ray Interpretation and the Philosophy of Chiropractic. Always having a love for animals, owning several dogs, cats and horses, he began working with all quadrupeds in the early '80s. After retiring from practice in  2002, he devoted full time practice to quadrupeds, specializing in equine, and  is a Certified Quadruped Adjuster with the International Association of Veterinary Chiropractors (IAVC). Licensed by the New Mexico Horse Racing  Commission and the California Horse Racing Association, he worked for the largest Horse Trainers at Golden Gate Field and Bay Meadows Race Tracks located  in the San Francisco Bay area. As a co-instructor of the west coast division of  Animal Chiropractic Seminars conducted by Dr. Daniel Kamen, D.C. from 2002 to  2008, Dr. Hampton currently conducts Equine and Canine Seminars worldwide.
Dr.  Hampton is the Equine Chiropractor for Parelli Natural Horsemanship at the  Colorado and Florida training centers and works with Pat & Linda Parelli's personal horses as well as their students, instructors and other horses at their  facilities.

To learn more about Dr. Hampton visit his web site at: www.EquineSpine.com 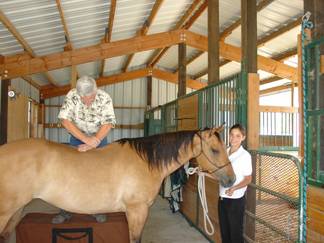 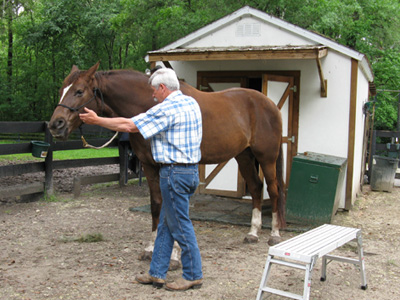 Mark is all about softness and becoming the best partner to your horse no matter your discipline. Mark has an incredible gift of seeing in moments the single most important thing a rider and/or horse needs help with and then teaching it in a very simple, easy to understand way, making huge changes quickly. Check out his website for clinic information www.markrashid.com

Mark’s first novel “Out Of The Wild” is going to be made into a movie......Bob built a saddle for the movie that is kind of a character in the story....see past made saddle #70 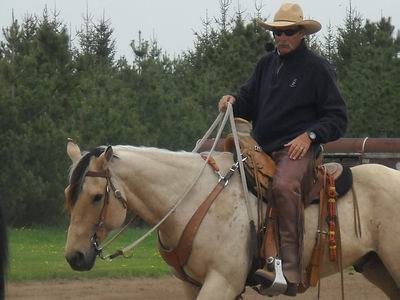 It is so refreshing and encouraging to meet another clinician who believes in the importance of getting a horse comfortable and balanced with correct fitting tack, balanced teeth, feet and health through as many natural choices as possible. This builds trust which leads to a great partnership and fun for both horse and rider.

We were very impressed with Samantha's philosophies and on how she approaches teaching etc.! I would highly recommend checking her out if you don't already know about her!
Website: www.learnhorses.com
Facebook Page: Alternative Horsemanship with Samantha Harvey 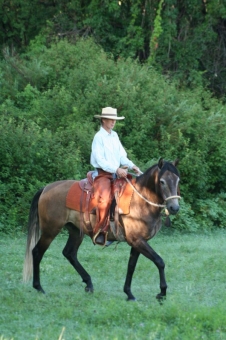 Over the years I have learned from each individual horse how to best help them resolve balance issues and conformation limitations. One of the reasons that  classical horsemanship interest me so much is that I can help horses minimize injury and strain to joints from the exercises I do with them. Every type of  horse and every type of riding can benefit from the classical art of gymnastic development. I have helped endurance riders, ex- race horses, eventers and fox  hunting horses as well as all types of western horses.
Ginger has a wonderful way with horses and teaching and we love her DVD and so have the many people who have bought it!
Bob & Terri - Out West Saddlery

Ant Desreaux of Reata Ranch - One of the most gifted horseman in Australia!!
"We highly recommend Ant for any of your Australian horsemanship needs and we are honored to know Ant & his family and to have witnessed his gift with horses and people!!"
Bob & Terri Beecher ~ Out West Saddlery

Reata Ranch is an equine service dedicated to providing first class horsemanship using natural principals & offering quality horsemens  equipment at a great price.
We offer horsemanship clinics,colt starting clinics,colt starting,  re-educating, pre-training foals, weanlings,yearlings & putting a good  working foundation on all of our horses without using fear and intimidation.  The relationship is the key to any partnership. Without a good relationship the  partnership cannot possibly work. 2012 will see us do a limited number of clinics and we will only be taking a limited number of horses for training, with  bookings filling up quick. We have quality gear for sale and can help with  saddle purchasing & saddle fitting. Please contact us if you are interested in anything we have to offer. 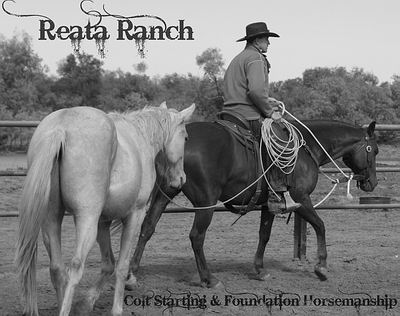 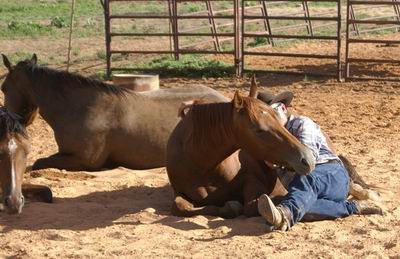 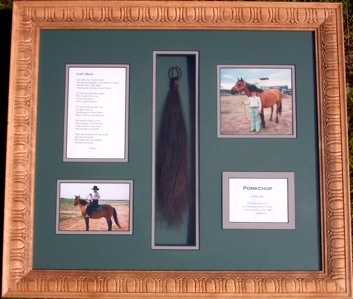 Tatum can take the horsehair from your special lost or beloved horse and make a memorial piece for you! She does beautiful work!! See her website for details:
www.equinememorieshorsehair.com 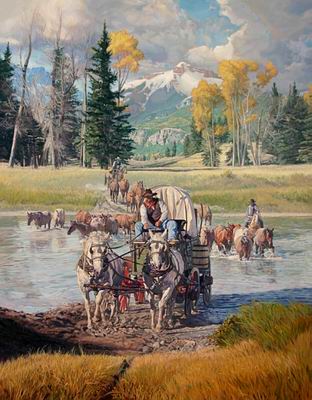 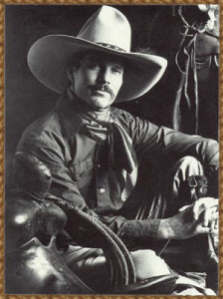 Lives & works in Pagosa Springs, Colorado. We are proud to call him and his wife Cathy special friends. Check out his website atwww.waynejustus.com and the latest collectible art pieces available, prints & giclee’s. You can commission Wayne to paint you and your horse! 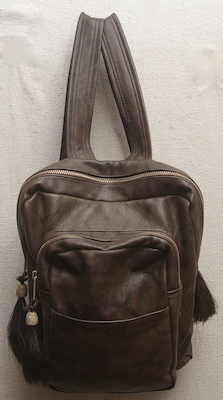 Marilyn at Dragonfly Stitches made this awesome leather backpack purse!  This is my second, the first one lasted 15 years and after replacing zippers is still going strong!  Check out her Facebook page to see all the other beautiful things she makes!

For a great hatter check out Nate Funmaker of Nathaniels Of Colorado from Georgetown, Texas
**Shown here with Bob and his new hat!! 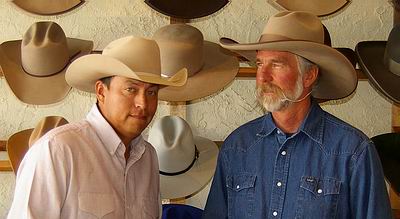 Steel Signs, Silhouettes,  Metal Art, Railing Inserts.
Custom Designs for Log Cabin or Timber-Frame Homes, Cabins, Lodges, Ranch, Farm or Business.  Thousands Of Images From Which to Choose or We Can "Start From Scratch" If you don't see what you're looking for, drop me a line & I'll be glad to  help! 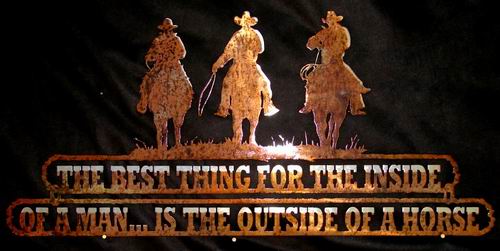