*Not to be used with a curb strap or bit hobble!!

These bits were designed to decrease the discomfort at the corners of the horse's mouth. The bit will not pinch. The extra 3 inch rings at each end of the mouthpiece float independently to disperse the pressure across the lip and cheek helping the bit to become more stable in the horse’s mouth, and in turn, allowing the horse to become more responsive to the rider’s cues. The rein attaches to the floating "D" ring outside the cheek rings.
"Lifetime Guarantee" on material and workmanship.
No returns on bits that have been used and are not defective.
**See below what else Mark Rashid had to say about his experience with these bits. See also Mark Rashids' DVD’s 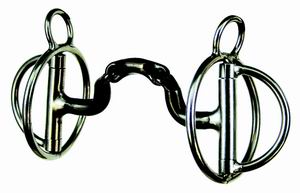 Rockin S Snaffle Bit 1/2"- Raised Snaffle Smooth Sweet Iron
The raised snaffle was specially designed by Mark Rashid to help horses with extra large tongues and/or low pallets! See below what else Mark had to say about his experience with these bits.

*The mouthpiece is soldered on at a slight angle meant to lay back in the mouth!

What Mark Rashid has to say about these bits -

“We began using the original Rockin S Snaffle Bit in 2006. Almost immediately we were struck by the positive changes that occurred in most horses we tried it on. Horses that had previously been head tossers, bit chompers or just “hard mouthed” suddenly became way more amenable and easier to work with.
Still, one problem the bit was unable to address was the same problem most traditional snaffle bits have. That is, it didn’t allow enough room in the mouth for those horses that had low pallets or thick tongues. For these horses, there are very few bits on the market that are of much use, or that they are comfortable in.
I had been having some success with these types of horses with a snaffle bit I had picked up years ago which had a relatively solid mouth piece and a medium port for tongue relief. In mid 2007 I contacted Mark Sulan, the fellow that came up with the original design for the Rockin S Snaffle, and talked with him about the possibility of using his cheek pieces on a mouthpiece similar to the mouthpiece that had been helpful to the horses in question.
My original idea for the mouthpiece was for it to have a port for tongue relief for thick tongued horses, and for the port to lay back in the horse’s mouth so it wouldn’t interfere with horses with low pallets. This idea was kicked around for a while between Mark and I and a couple other folks. A mouthpiece was designed but quickly discarded due to too many moving parts.
Eventually, a design was settled on, and prototypes of the bit were built. The bit was tried on a large number of horses, some with low pallets, some with thick tongues and some who simply seemed troubled by having a bit in their mouth. In each case there was a notable positive difference within minutes of the bit going in the horse’s mouth. In one case, one of our student instructors had been riding a horse for over a year and was unable to get the horse to settle. The mare was extremely agitated all the time, and it didn’t matter if she was in a bit (of any kind) a bosal, halter or whatever. We tried the prototype of the Raised Snaffle on her and she immediately dropped her head, relaxed and went to work as if there had never been an issue in the first place.
This is pretty typical of the response we are seeing with the vast majority of horses we have tried the bit on to date.
Differences:
Snaffle bits all operate relatively the same way in a horse’s mouth. In short, the mouthpiece usually points toward the top (roof) of the horse’s mouth and slightly forward, toward the horse’s front teeth. When pressure is applied to the reins, the mouthpiece “breaks”, creating a sort of nutcracker effect in the horse’s mouth and exaggerates the upward/forward movement of the mouthpiece.
The Rockin S Raised snaffle operates in a completely opposite manner inside the horse’s mouth. As mentioned earlier, the three-piece mouthpiece, is ported. It also lies back in the horse’s mouth, toward the molars, instead of forward, toward the horse’s front teeth. In addition the mouthpiece lies relatively flat on the tongue. With this design, instead of the bit closing down and acting like a nutcracker when pressure is applied to the reins, the mouthpiece actually opens up in the horse’s mouth relieving pressure on the inside. It seems to be this part of the design that is popular with the horse’s we’ve tried it on. The vast majority of horses we’ve tried the bit on are immediately softer, quieter and more willing. Another benefit we’ve noticed is this allows the softness in the rider to come out as well.”
Mark Rashid 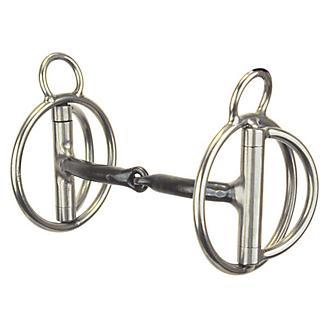