FUN HORSEY SOCKS!! All things horse!  These fun horsey socks will keep your feet warm and comfy and put a smile on your face.  They feature a reinforced heel and toe.  The height of the socks vary as well as thickness.  They make great gifts!
High Quality - Made in the USA 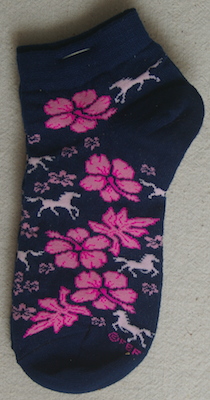 Socks have greatly evolved over time.  The earliest socks were made from animal skins gathered up and tied around the ankles. In the 8th century BC, the Greek people wore socks from matted animal hair for warmth. The Roman people also wrapped their feet with leather or woven fabrics. By the 5th century AD, socks called "puttees" were worn by holy people in Europe as a symbol of purity. By 1000 AD, socks became a symbol of wealth among nobility. From the 16th century onwards, a design on the side of a sock has been called a "clock".

After the invention of a knitting machine in 1589, socks could be knitted six times faster than by hand. Knitting machines and hand knitters worked side by side until 1800.

The next revolution in sock production was the introduction of synthetic thread or nylon in 1938. Before then, socks were usually made from silk, cotton, and wool.  Nylon was the start of combining two or more yarns in the production of socks, a process that still continues today.