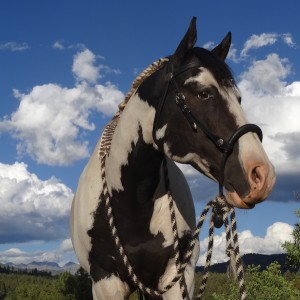 Did you know that Terri, (Owner of Out West Saddlery) is also an accomplished horse herbalist? Her equine herbs programs use Kinesiology to ask a horse what systems in its body are off balance, and need detoxification. Her work has helped horses and their owners immensely, sometimes in the face of a problem that had become chronically unsolvable by veterinarians.

Click to visit Terri's Out West Herbs page to learn more about having your horse evaluated, the herbal blends that are used, and testimonials!

Here is one story of a horse in dire straights that Terri was able to help change completely:
"I have a sensitive horse named "Dream Came True" or, Bravo for short. He's a big, registered paint gelding that was given to me after he was let go by his breeder for not fitting in with their training program to become a reining horse. They told me: "He just acts like he hates the world". Apparently he would bolt, bite, and buck. Basically whatever it took to get off the lead rope, away from touch, or out from under the saddle, he would try.

When he came to me, I handled him using Natural Horsemanship, and just let him live like a horse for a while. That helped a lot, and we got to where we could trail ride a little bit, as long as other horses were around and get along pretty well with each other, but he always seems like he just disliked being touched, and that his back was bothering him a lot. I figured that he has some sort of an old ligament injury in his sacrum or hocks from learning to do sliding stops at 2 years old.
He would still nip occasionally, and HATED cantering under saddle, and his backbone stuck up even though his weight was good. I tried a lot of different things, including nutritional changes, a different saddle, a different pad, dental work, chiropractic work, acupuncture, balanced hoof care, and even veterinary shockwave therapy and steroidal injections in his back. I was desperate to help him, but no matter what I did, it seemed like it would make a difference for a while and then he would slide right back into pain and irritability of before.
After I'd had him for 1.5 years, I took him with me when I moved across the country from North Carolina to Colorado. Being in the trailer for such long chunks of time threw his back and mood into the worst condition I had ever seen. Finger palpations of less that a pound of pressure would sent his back into spasms, and he would drop like he was going to fall down. I was worried that he would never recover or be rideable again, and scared that I would have to put him down if he became too aggressive, as I didn't dare let someone else take him who might not understand his pain.

And then I met Terri and Bob Beecher. Bob, being a master of corrective saddling had a lot to say about my tack, and Terri, being a super knowledgeable whole horse health practitioner told me that my horse was exhibiting classic signs of herpes. I of course freaked out, not really understanding what that meant, but Terri assured me that it was something we could work with. She took a hair sample, and used kineseology to prescribe a round of herbals to balance his brain, clean his blood, and detox his whole body. Within 6 weeks, Bravo had gone from borderline aggressive/dangerous in certain situations, to very soft and relaxed. He stopped being defensive about brushing and food, and was happy to accept me riding bareback, although the saddle still bothered him.
We continued with the herbals for more than a year, and his whole demeanor and level of physical comfort improved drastically. His body filled out, and became muscular and strong instead of tense and tight, His back muscles filled out on either side of his spine, and his coat and hooves also greatly improved. We had struggled with a central hoof crack that ran from toe to coronary band since the day I got him, and had never been able to get it to grow out, despite the work of some great farriers. I fully believe that the herbals supported his body from the inside out, and allowed all of his cells and nervous system to cleanse and regenerate in a way that could never have been achieved from outside therapies.

Today, Bravo and I ride on intense trails in the high country several days a week in the Spring Summer and Fall, and occasionally participate in clinics and other events. He has become an incredible, steady, happy horse that I can rely on in all situations, and trust to be there for me mentally, emotionally, and physically in ways that I never would have dreamed possible when I first met him. He was someone else's give-away, but is now my "Dream Came True", thanks to Terri and Bob's amazing help."